One Laptop to Rule them All

One of the reasons I finally pulled the trigger about a year ago on a > $2k Mac was the promise that I could run all current popular OS configurations on it: OSX, Windows and Ubuntu Linux.
I finally parted with my cash in December 2011 (note that date - it will be relevant later), and my shiny silver MacBook Pro arrived just before Christmas.

Setting it all up

It took me a little while to get used to OSX, and one of my first projects was to fire up a VM or two. Being a bit cheap, I opted for VirtualBox instead of Parallels, a free product I had grown to like a lot while I was working at Sun (but is now owned by Oracle).
Ubuntu was easy. Download the ISO, create a new VM and point it at the ISO. Done.
Windows created more of a challenge. Partly because I wanted to see if I could make my old laptop 'virtual'. I imaged my laptop's disk and attempted to convert it for use in the VM. I was almost successful, but lets just say I don't use that VM - it's just there in the list to remind me not to waste time on stupid things in future...
So then I thought I'd finally use that Windows 7 upgrade disk I got shortly after purchasing my Vista desktop PC.
But how to do it?
I went through all my disks trying to find a full version of Windows. Finally I found one that would install so I could use the upgrade. After way too much wasted time, I had a Windows 7 VM on my Mac!
Then, a short while later, Windows 8 release preview comes out. Thankfully this was much easier to install into a VM. (It's relevant - see later...) 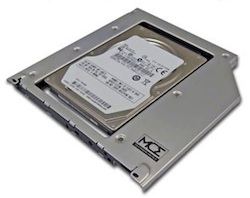 Fast forward a few months - it's nearly Christmas again, and to my complete delight I see an Intel 480Gb SSD on sale for $329. That will make my Mac sing, I thought! (In actual fact it made it groan before it sang...)
My mistake was to get storage greedy and purchase an OptiBay drive enclosure. The idea is that you take out the little-used DVD 'super' drive and place a second hard drive in its place. You then place the DVD in an enclosure and plug it into your USB port when required. (Actually, you might need to occupy two USB ports, especially when writing to DVDs, because they consume more power than your average USB device.) Which brings me to another beef with my Apple - why only two USB ports? Would it kill them to put another one on each side of the laptop, making 4?

Back to the OptiBay story:
Issue #1 - OK, I'm about to mess with drives here - better be prepared for the worst - where's my OS recovery disk? Can't find it. Call Mac support - don't need a disk - go to some obscure website and download the OS, create a recovery USB.
"Why do you need it?" They ask.
Innocently, I reply: "I want to install my own hard drive and install OS X on it."
Apple guy: "It'll void your warranty."
Me: "But I did my own memory upgrade."
Apple guy: "That's OK, we let you do that - but don't even think about putting your own hard drive in, it'll void your warranty unless you get an authorized Mac Dealer to do it. and BTW, it can only be an SSD make  & model we approve of, which you purchase through our Dealer."
Seriously?! Forget that, I'm doing it my way.

Issue #2 - Open up the Mac, locate the drive. Undo some screws only to find that some won't unscrew. Look closer - it's a different kind of screw with a star shaped head!  Check Optibay documentation - use provided Torx bit - Torx Size 6 to be precise. Only they didn't provide one...

Issue #3 - Finally found right screwdriver bit - try again. Slot SSD into OptiBay slot and boot up. Drive is recognized - time to format it. Format successful. Check disk - disk has errors! What? Format it again. Disk does not have errors. Check again 2 secs later - now it has errors! What?!?@#?$?@!
Browse forums - eventually discover that the Optical bay slot will recognize a 6Gb/sec drive, but doesn't support it - on my particular MacBook Pro 8,2 late 2011 model. Earlier models will accept the SSD and run slower, newer models will accept the SSD and run fine at full speed. See compatibility notes on this page. Solution: swap the drives. Finally with the SSD in the main slot and the HDD in the OptiBay slot I'm finally up and running with close to 1Tb storage.

Issue #4 - Microsoft emails me offering Windows 8 Pro upgrade for $40, because I downloaded the release preview. Pretty good deal, no? Do I need it? Well it would be nice to dual boot - enter the wonderful mystery world of Apple's BootCamp. How will I get this onto Bootcamp? Plan A - Burn Win8 Preview to DVD, run Bootcamp, create Windows partition, plug in external DVD drive, re-boot and load up the Windows installer. Easy, right? Except Bootcamp won't let me proceed - no optical drive. Yes there is - it's plugged in right there! Forget this: reboot anyway. Disk whirs, blank screen. Wait several minutes. Disk spins down. Nothing. Hold down power button for a few seconds. Remove disk from USB port. Restart system. "No bootable media found - press key to try again." Insert USB drive again. Press key. Nothing - it's frozen. Reboot again. Same thing.
At this point I'm really worried that I might be screwed. Thankfully I knew about the option key boot option. Restart system, hold down option key, breathe relief when your Hard Drives show up and you can get back into OS X.
So what can I do? How about booting from a USB? Surely that works - many MacBook Airs and Pros don't have a DVD drive. Surely that must work.  So I use Microsoft's Windows USB Loader program to create bootable USB. Plug it in. Try again. Nope! "No bootable media found."
Then I find out you can also press the C key on boot to force it to boot from CD/DVD drive. Nope. "No bootable media found."
Seriously? Burn gparted to DVD. Try again. Hold down C and gparted boots up Linux no problem. But not Windows. Hmmm.
Search forums online. Some people can, some can't install Windows via Bootcamp. Then I discover that someone put their DVD drive back into the Mac - it worked!
Open up Mac, replace HDD in optical bay with DVD drive containing Windows setup disk. Close up Mac. Reboot. Hey presto, the Windows logo appears!
So the evidence here is that Apple has specifically locked MacBook Pros with Optical drives from booting via USB. What's with that?!!

Now I finally have Windows 8 on my SSD on my Mac, I'll be able to tell you what I think of it in my next post.
Posted by Sam Biggs at 12:32