Elite: Dangerous - I need to feel part of you!

I know there are ways in which I could feel more involved in Elite: Dangerous.
I could join a private group. Make friends with commanders, and get involved in their activities.

However, I am a lonely soul and I'm not sure I'm ready for that level of involvement. I don't have the schedule to be responsible to other people in a group and ultimately I feel like I'd just end up letting them down.

I need to feel involved in the game in a different way. And I think others do too. In fact I think they're silently screaming out for it. The other day, I was contemplating the comments I've heard about E:D. How people are enjoying the general experience of being in such a large sandbox, but not feeling any true sense of purpose.
I think there are so many people out there who love the IDEA of E:D. But it's a game that unleashes imaginations, and meeting those high expectations is a monumental task.

So I go to Erlich City on Mercury and notice that the Dropship is cheaper here: CR 12.8m. Next I travel to Mars High station, expecting the price to be the same, but no, it's regular price, over 1 million credits more: 14.2m. It feels weird that there is no pattern here. I'm at the Capital of the Federation and there's really nothing special about Mars High. 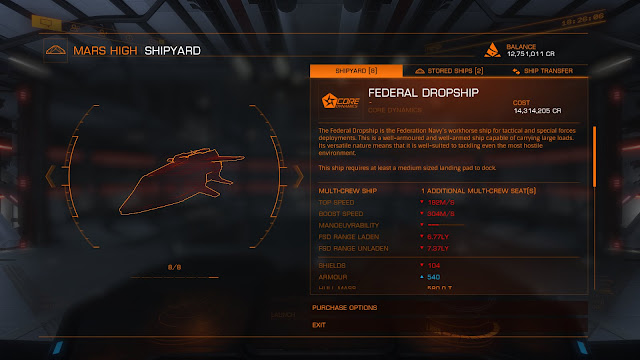 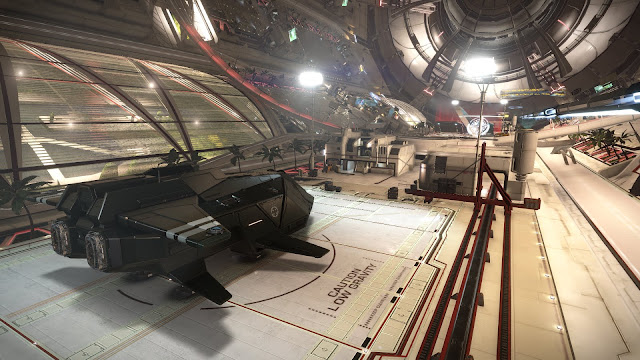 The first thing that strikes me is that other than Mars High looking pleasantly different to most other space stations (notice the Palm Trees?), there's nothing really special about it. The missions are the same, there are no special commodities in the market, nothing special about the ships for sale and the modules you can buy. (In fact there are only 8 ships for sale here!) The only thing that stood out to me is that finally I can buy some more passenger cabins. (Most stations don't have them in such variety.)
And what perhaps surprized me most: At Mars High - one of the most civilized and controlled systems at the heart of humanity, there's a Black Market! That just feels wrong! 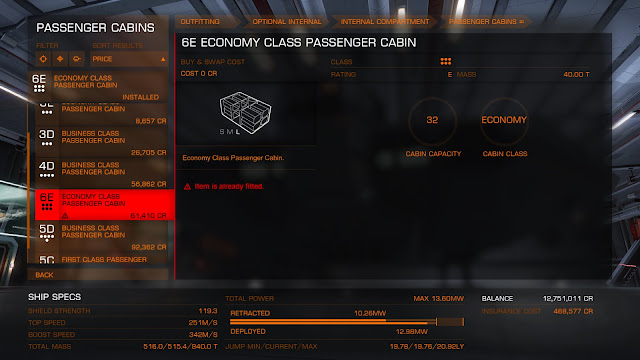 It could be so much more

What I realized was that none of this landmark experience feels really special or exciting. Buying my first Federal ship should be a special event. It should be a milestone in the game. A gateway to new content and adventures. But no. There's nothing to see here. Just continue doing what you did in a new ship. The only incentive I have at this cross-roads is to go on earning credits to buy bigger and better ships. Or stop playing. (And I'm sure Frontier didn't intend that.)

What if there were places in the Galaxy you can only enter in a Federal ship? Special military stations where there are only Federal factions with a completely different agenda. Now I'd truly feel like I had progressed in the game.
These stations would have a different look about them. Here you can only buy certain ship upgrades specifically for Federal ships. Here there are special missions and covert operations only for Federal allies. Here there are special commodities that need transporting and special projects to help the Federation further its reach. Here I would feel like I'm part of the Federation.
And if I arrive in a non-federation ship and ask for docking permission here, I'm know I'm going to be denied - unless I have special permission because I'm running a special mission for the Federation. (Or I'm flying a stolen federation ship and hoping the access code checks out!)

And that doesn't just apply to the Federation. We should (and do) have Empire and Alliance stations. But these stations equally need an identity. They need to really FEEL different. And that even goes for the uncontrolled, anarchic systems. Stations out there should feel seedy and out of control.

Now don't get me wrong, I'm not saying that Federation controlled systems only have Federation stations. Corporations are still free to run stations and do commerce. And various factions can run out of them, just as they do in-game today. I'm proposing that more stations with specific restrictions and identity are added to allow a player to really feel like they side with the Federation, Empire or Alliance. (And swapping allegiance needent be anything more than turning up in a different ship with the appropriate minimum rank.)

None of these suggestions seem like they're unreachable. All the elements are already there in the game to tighten it up and make it that much more like I can identify with the game and truly feel like I'm part of it.
I truly think Elite:Dangerous is a game worth spending time with. But given the right tweaks it could be so much more immersive!
Posted by Sam Biggs at 12:54